Concept Plan
Based on the above vision, the project team developed concepts for the West End that focus on 5 primary areas: Focusing efforts on these key areas will have significant synergistic effects on the redevelopment potential of other properties in the West End. 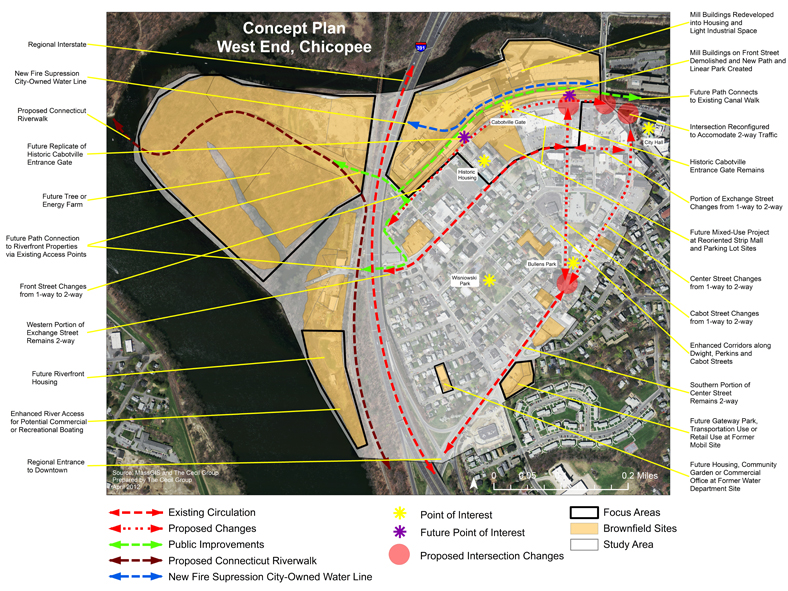 Key Initiatives
The concept plan reactivates the neighborhood through the following key initiatives:

Redevelopment of the Cabotville & Lyman Mill Properties
These structures are currently underutilized and therefore detract from the neighborhood's appeal. The city should primarily focus its efforts on supporting or facilitating the redevelopment of the Cabotville Mill Complex in the near term based on the following traits: Restore Environmental Health
The urban environment should be restored to conditions that are considered healthy for: Create Public Amenities
There are opportunities to improve the West End through the creation of new public amenities, particularly a path and park along the canal. Such a path could connect the Connecticut Riverwalk and Bikeway Project to the Chicopee Canal and RiverWalk. A new path and park along the canal would increase the amount of open space in the West End and draw people to the neighborhood.

Improve Infrastructure
To support the redevelopment of mill buildings and encourage neighborhood revitalization, several infrastructure improvements are necessary. These include a water line replacement and possible road widening.

Change Circulation Several of the roadways in the West End only allow 1-way traffic, which has anecdotally hampered West End businesses. Converting them into 2-way streets would support businesses by enhancing their visibility and accessibility. It would also help to create a stronger link between the West End - the targeted Brownfield sites - and the regional transportation system.

Market Overview
FXM Associates prepared Technical Memorandum early in the planning process to assess key population, business and employment characteristics and trends affecting economic development potential in the City of Chicopee. Key findings include the following: FXM also conducted Residential and Commercial Market Analyses as part of the AWP as summarized in the Technical Memorandum. Key findings include the following:

Market Analyses Findings
Implementation
The overall goal for the West End Brownfields Plan is to stir excitement for broader revitalization by enabling market-based change in the most significant properties - especially the Cabotville Mill Complex - while providing improvements for public accessibility, general cleanup of city properties and streets, and cooperative outreach to attract new commercial tenants.